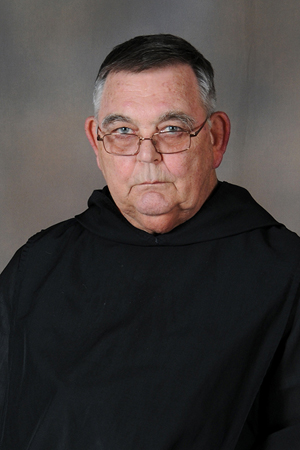 In the mid-morning of Sunday, May 2, 2021, Brother Angelo Vitale, OSB, monk of Saint Meinrad Archabbey, died peacefully in the Lord after a slow but steady decline in health. He was a jubilarian of profession.

Brother Angelo was born in Connellsville, Pennsylvania, on February 26, 1941, the third of five sons to Anthony J. and Catherine E. (Suwila) Vitale, and he was given the name Pasquale William at his baptism. For the first three grades of his elementary education, he attended St. Rita and Immaculate Conception Catholic schools in Connellsville, and then attended public school in Hope, Indiana, for grades 4 and 5.

Due to his father serving in the U.S. Army, the family continued to travel, and so Brother Angelo spent grades 6 through 8 at Service Schools in Ulm and Heilbronn, Germany, before returning to Hope for his freshman year of high school. He attended the Bruté Latin School in Indianapolis for his sophomore year, and then St. Mary’s College in St. Mary, Kentucky, for junior year. In 1958, he entered our St. Placid Hall, where, at his request, he repeated his junior year and then continued through his senior year. During this time, he worked in the Abbey’s Carpenter Shop.

Brother Angelo’s first monastic assignment was in the bakery. He also rang the tower bells for Mass and Vespers for several years. He enjoyed long tenures as one of the monastic community’s barbers and as a radio operator for the Saint Meinrad Volunteer Fire Department.

Brother Angelo will be remembered most for his 56 years as tailor and shoemaker. He supplied his confreres with habits, cucullas, albs, and stoles, and performed these services for various religious communities throughout the country. He was a student of the Myers School of Fashion Making of New York City, specializing in pattern making. Brother Angelo also was a member of the National Registry for Orthopedic Shoe Technicians and was thus recognized for his craftsmanship in the art and skill of shoe modifications and the custom making of shoes as directed by the medical profession.

Brother Angelo was a no-nonsense person, down to earth in his views and expressions, and he valued his independence. He especially enjoyed attending family gatherings, and scrupulously devoted equal loving attention to the Italian and Polish sides of his genealogy. He enjoyed sharing his skill with fabrics and shoes with co-workers and apprentices. Many years ago, during an interview with a reporter, he proudly claimed that while he as a tailor had never stitched his finger, he had as a cobbler been known to occasionally hit his finger with a hammer. “What does a monk say when that happens?” the curious reporter inquired. Brother Angelo smiled easily and said, “Probably the same thing you would say.”

Having provided the clothing and footwear for hundreds of monks, priests, and religious over the years, we confidently pray that now the Lord our God “has wrapped him in light as in a robe, so that everything of the old is gone and now all is made anew.” (2 Corinthians 5:17)

Brother Angelo had celebrated his 80th birthday a few months before his death, and he was in the 58th year of his monastic profession.

Angelo was an Army brat and lived lots of places before his father and mother settled in Indianapolis. They were a part of the Fort Benjamin Harrison army retiree squadron, and lived not far from the Fort—so Mrs. Vitale would often go to church on Sundays at the Fort. For years and years, Saint Meinrad sent a priest every weekend to Ft. Harrison to help with Masses.

So, if you pulled that assignment, then sooner or later it was convenient for all around to stop at the Vitales to drop something off or pick something or someone up. And then you could get a glimpse of Angelo's family—his sweet mother; his father, maybe a little brusque on the outside, but sweet, too. Like Angelo, I think it safe to say. Angelo's father was engaged in some of the charitable work associated with the chaplaincy, if my memory serves.

The smallest glimpse into the family was a glimpse into an Italian family. So food was important—Angelo's father was great baker, as I recall. Angelo's facility in the kitchen came to him fair and honest from his family.

Another thing that came to him as an Italian were his hands—skilled hands, intelligent hands. Italians are all one way or another artegianiti. Their brains are in their hands. I remember this of my own father and brother. Angelo's hands were likewise intelligent, and he was happy in his work at the tailor shop. He could make the cloth do what he wanted it to do. And he wanted the cloth to be good looking. He wanted the cloth to fit. He wanted the habits to be good looking. And, indeed, they are.

The only time I ever was really mad at Angelo was when he destroyed my favorite habit. It was made of cloth the shop didn't deal with anymore—it had a certain stiffness in it, like a sort of a sailcloth—and it was a Br. James habit and I was really attached to it. But Angelo helped me live up to the monastic ideal of non-attachment to earthly things. He knew I was attached, but with some glee, he freed me from my attachment by putting that old habit to the tailor shop test: one strong pull between his two strong arms.

The cloth failed. I was necessarily freed from my attachment. Angelo's was, however, a properly spiritual glee, in accordance with the Rule (c. 55), which stipulates that habits should fit—neither too short nor too long, not showing the shank, not brushing the ground. Angelo's habits never did that. Also, in Angelo's mind, and in accord with the Rule, not too patched, not too obviously worn-out relics, but worthy of the consecrated life.

But I haven't said enough about his craftsmanship. In the first place, beyond needle and thread and chalk and scissors, the tailor shop and the shoe shop with it, have lots of machines: buttonhole makers and electric scissors and leather sewers and leather cutters. He understood how all these things worked and could keep them in order and manage and repair them. With his hands, his intelligent hands and some hand tools.

In the second place, remember that in the old days, a monk had a winter habit and a summer habit. This was before air conditioning, and for a long time we were in a leaky building, the old monastery, that could get pretty cold in January and February and was stifling in July and August. But all this changed in the new era with the new buildings and when we got rich.

Angelo oversaw this transition, to a sort of all-season habit, the nice wool blend we have now. And he cut these uniforms—as he called them—but he was from a military background, remember—he cut the uniforms to his own pattern. He adjusted the patterns he inherited from Br. James and Br. Innocence and the old times. He updated them. But he had all these patterns to consult. He kept them all. And the shop had a good collection of 19th-century patterns for all sorts of clothing, as well, and Angelo learned from them how things can be done otherwise. As I say, he brought intelligence to his work.

He curated not just patterns of clothing, but patterns of life. One of the best stories was of the tailor shop in the days of Br. Innocence. After an abbatial visit to the shop, Archabbot Ignatius congratulated Innocence and James and all the shop for the exemplary way in which they kept the day silence the Rule recommends. No voice was heard. No idle conversation. No friendly exchanges.

And they were silent, Angelo explained, because they were all mad at each other and no one would talk to anyone else. But they kept that explanation to themselves and did not think the Abbot absolutely needed to be informed of the lay of the land in the tailor shop. Silence can be useful for many things.

Angelo's shop, to my knowledge, was always a happy shop. And you could tell this by the freedom and confidence and peace with which Freeloader took possession of the top of the great table where this that and the other piece of cloth was laid out, walking carefully over everything until she found a place to curl up and take the good nap. No self-respecting cat would abide an unhappy shop, and Freeloader seemed always happy for the 18 years of her long and contented and peaceful life.

It was a contented shop, a happy shop—think of the friends Angelo made from his sometimes helpers there. He made fast and long-standing friendships with the Vietnamese seminarians who helped out from time to time. And he kept up with these people, and they kept up with him.

Angelo, of course, knew how to measure a man, measure a man for a uniform, or a woman for a wedding dress. I think he liked the wedding dresses, by the way—they were a challenge to his imagination and skill that made cutting and sewing uniform after uniform more tolerable. But he could take the interior measure of someone, too. He was a shrewd judge of character. Not that he insisted on telling you what he thought about everyone. He didn't. You had to ask. But you would get a good answer.

As we all know, the Rule of St. Benedict makes ample provision for the craftsmen of the monastery. They are not to think that proficiency in their craft necessarily means they are proficient monks or escape the duties of humility and obedience (c. 57). And they are to avoid avarice in pricing their goods. St. Benedict wants all the workshops to be within the monastic enclosure, too (c. 66). Then the monks won't be wandering off and gyrovaging around, which St. Benedict thinks is dangerous for their souls. All of this Angelo lived.

What we might not be so aware of, however, is that St. Benedict thinks of the entire monastery as a workshop, an officina (4, 78). The craft that all the monks practice there is the ars spiritualis—the spiritual craft. And the tools of this craft are the good works listed in chapter 4. We can tell what the product of the monk's craftsmanship is from the tools themselves, the way you can tell what a craftsman is up to by looking at the kind of tools he has, whether for wood, or metal, or stone, or cloth.

Now, of course, the tools of a workshop don't tell us exactly what the craftsman is making. Will the tools make a dress, or will they make a habit? And the odd thing is, neither does St. Benedict tell us exactly what the monk is making. St. Benedict himself cannot really put the product of the monastic workshop into words. And this is because the goal of monastic life is transcendent. It is a life that is worthy of God, and so cannot be described apart from God.

So we can put it into words as much as we can put God into words, which is not at all, and that is because the goal is God, the possession of God—or being possessed by God in charity. For this reason, at the end of chapter 4, Benedict retires with the humility of St. Paul behind the words of St. Paul: the wages of our monastic craftsmanship—the wages of our monastic life, the "product"—will be "what eye hath not seen nor ear heard, nor the heart of man conceived—what God has prepared for those who love him" (1 Cor 2:9). What God has prepared for those who love him is God himself.

Let Angelo enter into the joy of his master, and what God has prepared for him, we pray he now enjoys.

Back to Necrology listing