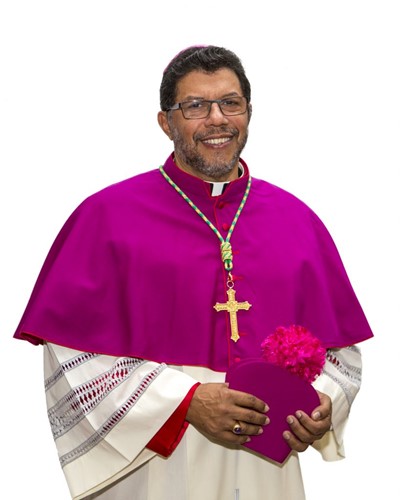 Saint Meinrad Seminary and School of Theology, St. Meinrad, IN, will present the 29th annual John S. and Virginia Marten Lecture and Workshop in Homiletics on Tuesday and Wednesday, October 1 and 2, on the Saint Meinrad campus.

The lecturer for this year’s program is Archbishop Jason Gordon. He has served as the archbishop of Port-of-Spain (Trinidad and Tobago) since October 2017.

Archbishop Gordon, a native of Trinidad, studied for the priesthood at a seminary there. He continued his studies at the Catholic University of Louvain, Belgium, where he earned both his bachelor’s and master’s degrees in theology. He later completed his PhD in London.

Archbishop Gordon was ordained a diocesan priest in March 1991 at the age of 32. After his ordination, he lectured at the regional seminary and managed a number of projects in the Living Water Community, including Fountain of Hope and the Marian House for young men.

In 2003, Fr. Gordon was appointed parish priest of Gonzales and created projects to improve the Gonzales community, which was affected by gang-related violence. He helped start a homework clinic, an internet café and a project known as CITY (Community Interventions Transforming Youths).

In 2007, then Archbishop Edward Gilbert appointed him to the newly created position of vicar for administration. Two years later, Pope Benedict XVI made him a monsignor.

In 2011, he was appointed bishop of the dioceses of Kingstown in St. Vincent and Grenadines and of Bridgetown in Barbados.

In 2017, he was elected vice president of the Antilles Episcopal Conference, the regional body of Catholic bishops for the English, Dutch and French-speaking Caribbean territories.

The Tuesday evening lecture is entitled, “An Archbishop Reflects on Strategies for Preaching.” The lecture will begin at 7 p.m. in St. Bede Theater. The next day, October 2, from 9 a.m. until 3:30 p.m., a corresponding workshop will be held in St. Bede Hall.

This lecture/workshop series is made possible by an endowment established by the John S. Marten family of Indianapolis. For decades, Virginia Marten and the late John S. Marten have generously supported the homiletics program at Saint Meinrad.

Parking is available behind St. Bede Hall, as well as in the Guest House and student parking lots. All times are Central Time.

Redeemed: A Musical Journey through the Stations of the Cross