The Benedictine monks at Saint Meinrad Archabbey in St. Meinrad, IN, celebrated the priesthood ordination jubilees of six of their confreres on May 26, 2019. 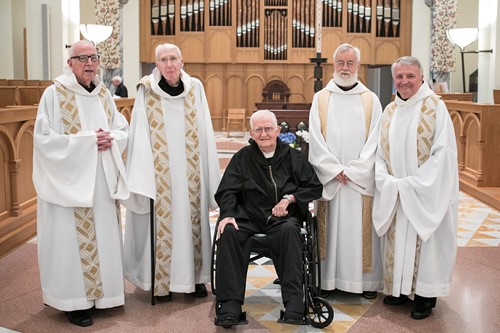 The Benedictine monks at Saint Meinrad Archabbey in St. Meinrad, IN, celebrated the priesthood ordination jubilees of six of their confreres on May 26, 2019.

Fr. Vincent is a native of Pittsburgh, PA. He professed his vows as a Benedictine monk on July 31, 1954. He graduated in 1956 from Saint Meinrad College with a bachelor’s degree in history and then earned a baccalaureate in sacred theology from The Catholic University of America in 1960.

Fr. Vincent taught at Saint Meinrad’s high school and college. He also served as dean of students and vice rector at Saint Meinrad College, as well as spiritual director and director of the summer vocational institute.

For 18 years, he taught Greek at the Gregorian University in Rome, and 19 years taught Greek and Latin at Sant’ Anselmo in Rome. He was secretary general of the university for 16 years and Roman procurator generator of the Swiss American, American Cassinese and Brazilian congregations.

He returned to Saint Meinrad in 2005 to serve as manager of the newly built Archabbey Guest House and Retreat Center. Fr. Vincent currently does spiritual direction and serves as chaplain for Guest Services.

Fr. Augustine is a native of Cedar Rapids, IA. After graduating from St. Patrick’s Catholic School in Cedar Rapids, he came to Saint Meinrad to study for the priesthood.

His first assignment was as assistant director, disciplinarian and instructor at St. Placid Hall, a high school for boys interested in becoming Benedictine brothers. When the school closed in 1966, he was assigned to San Benito Priory in Peru, where he taught math, physics and religion.

After the 1970 earthquake in Peru, he became the director of reconstruction and physical facilities. In 1979, Fr. Augustine returned to Saint Meinrad, where he served as physical facilities director until 1986. He then served 10 years as pastor of Our Lady of Lourdes Catholic Church in South Pittsburgh, TN, and as overseer of a 600-acre beef farm.

Other assignments have included mail delivery, house prefect and director of Spanish ministry.

He currently resides in the monastery infirmary.

Fr. Lambert is a native of Pittsburgh, PA. He professed his monastic vows on August 15, 1956, and was ordained on September 20, 1959. He has a bachelor’s degree from St. Vincent College, Latrobe, PA; earned two master’s degrees from Saint Meinrad School of Theology, and has a master’s degree from Duquesne University.

Fr. Lambert taught Latin in the seminary at Saint Meinrad following his ordination. He also taught at Penn State University and Mount Sacred Heart College in Connecticut. Then he held a number of positions in the monastery and was assistant pastor at St. Mary Parish, Huntingburg, IN.

He has been engaged in retreat work and parish missions for more than 50 years. He was a frequent retreat master for Mother Teresa’s Missionaries of Charity in the United States and India.

In 1995, he was elected archabbot of the monastic community and served until 2004. He currently continues his retreat work for bishops, priests, religious and laity across the United States.

He is the author of two books, Because There Is Jesus and Latin Sayings for Spiritual Growth.

He earned master’s and doctoral degrees in Biblical languages and literature from St. Louis University and a Master of Divinity from Saint Meinrad School of Theology.

Fr. Eugene taught Scripture for eight years at two St. Louis colleges, Notre Dame College and Fontbonne College. In 1979, he began teaching at Saint Meinrad. He served as dean of students at Saint Meinrad College from 1982-84 and as provost and vice rector from 1982-87.

Since 1997, Fr. Eugene has been engaged in full-time retreat work, conducting biblical retreats and workshops for priests, religious, and laity throughout the country and in several foreign countries.

Fr. Eugene is a member of the Catholic Biblical Association, The Society of Biblical Literature, and The American Academy of Religion. He is a past president of The American Benedictine Academy.

For the past 20 years, Fr. Eugene has been a contributing writer for Weekday and Sunday Homily Helps, a service published by St. Anthony Messenger Press. He contributes book reviews to The Catholic Biblical Quarterly, The Review of Biblical Literature, Cistercian Studies and other scholarly journals. He also is an associate editor for The American Benedictine Review.

Fr. Raymond is a native of Detroit, MI. He professed his vows as a Benedictine monk on August 15, 1964, and was ordained to the priesthood on September 28, 1969.

He served as assistant professor at Saint Meinrad School of Theology from 1973 to 1977 and then served as a chaplain in Colorado for two years.

In 1981, he began teaching at The Catholic University of America, where he currently is associate professor of spirituality in the School of Theology and Religious Studies. He is the author of two books and numerous journal articles.

Fr. Godfrey is a native of Alton, IL. He attended Saint Meinrad College, earning a BA degree in history in 1988. He professed his vows as a Benedictine monk on August 6, 1989.

After completing his priesthood studies at Saint Meinrad School of Theology in 1994, he was ordained a priest on June 5, 1994. He earned a PhD in liturgical studies in 2003 from The Catholic University of America.

Fr. Godfrey served as associate pastor of St. Benedict Parish (now Cathedral) in Evansville, IN, in 1994-95. He then became choirmaster for the monastery and dean of lay ministry and associate director of supervised ministry at Saint Meinrad School of Theology.

He served as pastor of St. Mary Parish in Huntingburg, IN, from 2012-13. He is currently assistant professor of sacramental and liturgical theology at Saint Meinrad and, since 2013, has been rector of St. Benedict Cathedral.

He also served the Diocese of Evansville as a member of the Priest Council, and currently serves as dean of the South Deanery and administrator pro tempore of Resurrection Catholic Church, Evansville.