The Benedictine monks at Saint Meinrad Archabbey, St. Meinrad, IN, celebrated the jubilees of monastic profession for four of their confreres on July 28, 2019. 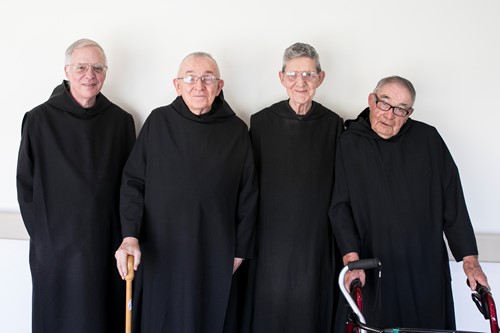 The Benedictine monks at Saint Meinrad Archabbey, St. Meinrad, IN, celebrated the jubilees of monastic profession for four of their confreres on July 28, 2019.

Br. Jerome was born in Belcourt, ND. After attending high school in Marty, SD, Br. Jerome came to Saint Meinrad and professed his vows as a Benedictine monk on May 10, 1949.

Br. Jerome worked in the Saint Meinrad vineyard for 30 years, and has had assignments in the wine cellar, on the building crew, and as a carpenter and landscaper. In the 1950s, he spent 18 months at Blue Cloud Abbey in Marvin, SD, a foundation of Saint Meinrad Archabbey.

Most recently, he assisted with housekeeping duties in the monastery. Currently, he is an infirmary minister and assistant.

Fr. Pius worked in Saint Meinrad’s tailor shop and in the infirmary until he was assigned to Saint Meinrad’s priory in Huaraz, Peru. He served there from 1964-84, except for the years he returned to the Archabbey to complete his priesthood studies. In Peru, his assignments included school principal, English and religion teacher, and seminary disciplinarian.

After his priesthood ordination, he returned to Peru, where he served as pastor of St. John the Baptist Parish in Lima. From 1978-84, he served as the superior of the priory.

He returned to Saint Meinrad in 1985 and served as chaplain to the sisters at Monastery Immaculate Conception in Ferdinand, IN, and was director of food service in Saint Meinrad’s monastery. Fr. Pius was pastor of St. Mary Parish, Huntingburg, IN, from 1987-2008.

Currently, he is commuting chaplain for the Hildegard Health Center at Monastery Immaculate Conception. He also does correspondence for Saint Meinrad’s Development Office.

Fr. Micheas professed his monastic vows on August 15, 1959, and was ordained to the priesthood on September 5, 1965. He is a native of Paducah, KY.

He earned a bachelor’s degree from Saint Meinrad College and a master’s degree in German from Middlebury College in Vermont. He taught in the high school and college at Saint Meinrad from 1965-70. He entered the U.S. Army in 1970 as a chaplain and served in Vietnam.

From 1976-77, Fr. Micheas served as assistant pastor at St. Benedict’s Parish (now Cathedral), Evansville, IN, and then as assistant coordinator of student life at Saint Meinrad College from 1977-82. In 1983, he returned to active duty in the Army as a chaplain.

From 1993-98, he taught Spanish and German in Saint Meinrad College. He served as parish administrator at St. John Chrysostom Church in New Boston, IN, from 1995-98. From 1998-2003, he served as a civilian contract priest at Fort Jackson, SC.

He then served as chaplain at Womack Army Medical Center in Fort Bragg, NC, from 2003 to 2015, caring for wounded from Iraq and Afghanistan. He returned to the monastery in 2015 and is living in the infirmary.

Fr. Samuel is originally from Chicago. He professed his vows as a Benedictine monk on November 13, 1969.

He earned a bachelor of arts and a Master of Divinity from Saint Meinrad Seminary. He received the licentiate in sacred theology with a specialization in sacred liturgy and monastic spirituality from the Pontifical Athenaeum Sant’ Anselmo in Rome. He earned a master’s degree in Latin and Greek literature and ancient art and archeology from the University of Colorado.

He also studied Gregorian chant with Dom Eugene Cardine, as well as music history and composition at the American Conservatory of Music in Chicago. He was ordained to the priesthood on June 2, 1996.

For 20 years, Fr. Samuel was on the faculty of Saint Meinrad School of Theology and Saint Meinrad College. He was a founding member of the Wake Forest University Divinity School in Winston-Salem, NC, where he taught for nine years.

In the Archdiocese of St. Louis, Fr. Samuel was the founding director of the Institute of Sacred Music and was on the faculty of Kenrick-Glennon Seminary.

Fr. Samuel has served as an advisor for the International Committee on English in the Liturgy for the new translation of the Roman Missal. He also has taught at The Liturgical Institute, Mundelein Seminary, Mundelein, IL, and at Christendom College, Front Royal, VA, where he was also director of liturgical music. He is an experienced retreat director in the areas of liturgy, spirituality, marriage and family living, and ecumenism.

He is the editor of The Hymnal for the Hours. His most recent publications include The Saint Patrick Gradual and the Saint Patrick Antiphonary. He is preparing the organ accompaniments for the Liber Hymnarius.

Currently, he is an adjunct instructor of languages and dogmatics at St. Patrick Seminary in Menlo Park, CA, and is on the staff of the Benedict XVI Institute for Sacred Music and Divine Worship, Archdiocese of San Francisco.