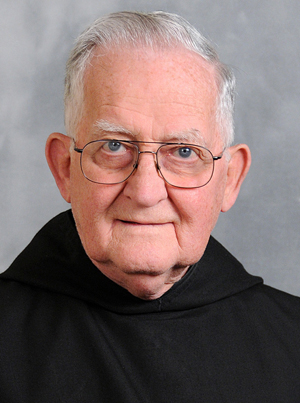 Just before noon on Monday, December 21, 2020, Father Augustine Davis, OSB, monk and priest of Saint Meinrad Archabbey, died peacefully in the Lord after a long period of declining health.

Father Augustine was born in Fairfax, Iowa, on September 21, 1930, one of six children to Claire Joseph and Georgette A. (Lana) Davis, and he was given the name Claire Daniel at his baptism. He received his elementary education from public schools in Solon, Swisher, and Cedar Rapids, Iowa, and then graduated from St. Patrick’s Catholic High School in Cedar Rapids.

Immediately after his ordination, Father Augustine was assigned as assistant director, disciplinarian and professor at Saint Meinrad’s St. Placid Hall. He also taught religion, mathematics, and industrial art courses until the closure of the Minor Seminary in 1966.

Soon after his ordination, Father Augustine began further studies during the summers, earning in 1966 a master’s degree in industrial arts from Indiana State University, Terre Haute.

Having completed his assignment at our St. Placid Hall, Father Augustine was then assigned to San Benito Priory and seminary in Huaraz, Peru, where he served as disciplinarian and professor of religion, mathematics, and physics. After the 1970 earthquake, he served as the director of reconstruction and the physical plant.

Returning to Saint Meinrad in 1979, Father Augustine served as physical plant director and as the liaison between the monastery and contractors for the construction of the “new” monastery and library.

In 1986 Father Augustine was appointed to South Pittsburgh, Tennessee, where he served as the pastor of Our Lady of Lourdes Church and the overseer of a 600-acre beef farm. Ten years later, he was assigned to Priorato San Benito Abad, Morelia, Michoacán, Mexico, an intensive position in which he regularly celebrated three Masses on Saturday and four on Sunday.

In 1997 he returned once again to Saint Meinrad, driving the mail/delivery van and directing the Spanish ministry program. In 2005 he was assigned to work in the Office of Physical Facilities.

Father Augustine was a ham radio operator and an avid stamp collector, frequently entreating his confreres to pass on to him all stamps on their incoming mail.

Especially devoted to our Blessed Mother, Father Augustine enjoyed his self-directed studies in Mariology. He was a member of the Marian Movement of Priests, and enjoyed serving as chaplain on pilgrimages to Medjugorje, Betania (Venezuela), Fatima, and Lourdes. He was also a charter member of the Pope John Paul II Institute of Christian Spirituality.

Father Augustine suffered a stroke in 2011, at which time he took up residence in our infirmary. Until the last weeks of his life, he was a faithful concelebrant at the daily Mass in the Infirmary Chapel.

At the time of his death, Father Augustine was 90 years old. A golden jubilarian of both profession and priesthood, he was in the 66th year of his monastic profession, and the 61st of his priesthood.

Back to Necrology listing