Fr. Lorenzo Penalosa, OSB, a monk of Saint Meinrad Archabbey, was ordained as a Roman Catholic priest on Sunday, August 30, 2020. 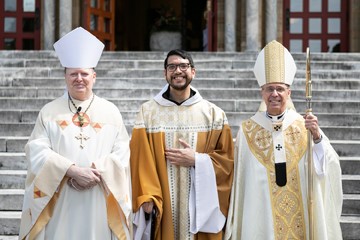 Fr. Lorenzo Penalosa, OSB, a monk of Saint Meinrad Archabbey, was ordained as a Roman Catholic priest on Sunday, August 30, 2020, by the Most Rev. Charles C. Thompson, archbishop of the Archdiocese of Indianapolis. The ordination was held in Saint Meinrad’s Archabbey Church, St. Meinrad, IN.

Fr. Lorenzo, 29, is a native of the Philippines. He is a graduate of Ben Davis High School in Indianapolis and Marian University, Indianapolis, where he earned a bachelor’s degree in Catholic studies and history in 2012. He was a member of St. Joseph Parish.

In May 2017, he graduated from Saint Meinrad Seminary and School of Theology with a Master of Divinity and a Baccalaureate in Sacred Theology. He has served as monastery guestmaster and as assistant to the director of the Institute for Priests and Presbyterates.

Currently, he is studying for an advanced degree at the Pontifical Liturgical Institute of Sant’ Anselmo in Rome.

Monte Cassino pilgrimages will be held in May

Christmas season Masses will be livestreamed