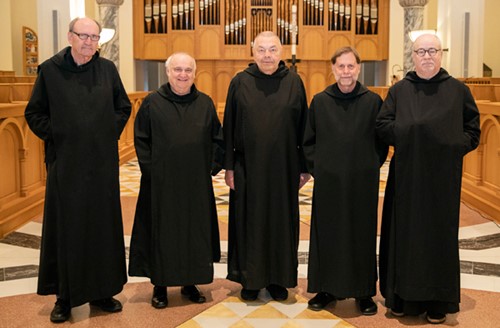 Br. Benjamin, born in Dubuque, IA, professed his vows on August 24, 1972. He attended the Latin School in Indianapolis, IN, and graduated from Saint Meinrad College in 1971. He also studied theology at Saint Meinrad Seminary and School of Theology.

His monastic assignments have included working on the abbey farm, plumbing, grounds crew, vestry, transportation, house prefect, lab technician, infirmary, and physical facilities, as well as in the winery. He has served on the St. Meinrad Volunteer Fire Department for more than 50 years, including as Abbey fire chief.

Fr. Harry is a native of Bardstown, KY. He made his profession of vows on August 24, 1972, and was ordained a deacon in 1976 and a priest on September 20, 1986. Fr. Harry has a bachelor’s degree in English from Saint Meinrad College, a Master of Divinity from Saint Meinrad School of Theology, a Master of Arts in religious studies from Indiana University, and a Doctorate in Sacred Scripture from Pontifical Biblical Institute.

Fr. Harry joined the faculty of Saint Meinrad School of Theology in 1979, where he has served as associate dean of students, dean of students and provost-vice rector. He also served as novice and junior master in the monastery. He is an associate professor of Scripture in the Seminary and School of Theology and serves as a spiritual director. He has also written a number of hymns.

Br. Martin, a native of Iron Mountain, MI, joined the Saint Meinrad community in 2005. Before transferring to Saint Meinrad, he was a member of the Marianists, where he professed his vows on August 15, 1972. He earned a bachelor’s degree in fine arts from St. Mary’s University in 1976 and a master’s degree in fine arts from Boston University in 1986. He received a liturgical consultant certification from Catholic Theological Union in 1995.

He is a well-known liturgical artist, working in painting, illustration, ceramics, stained glass, and worship space design. His work has included the design and renovation of various churches, as well as stained glass windows, processional crosses, murals, banners and various other appointments. In 2019, he completed a large tapestry of Christ seated in glory for the renovation of The Christ Cathedral in Garden Grove, CA.

Fr. Denis is a native of Iuka, MS. He attended Saint Meinrad College and the School of Theology, earning a bachelor’s degree in philosophy in 1989 and a Master of Divinity in 1993. He was ordained for the Diocese of Memphis in 1993. From 1993-96, he served as parochial vicar for the Cathedral of the Immaculate Conception in Memphis.

He then joined the Saint Meinrad monastery and professed his vows on August 6, 1997. From 1997-2001, Fr. Denis was director of continuing education and permanent deacon formation and an adjunct instructor in systematic theology for the School. He also served as executive assistant to the president-rector at Saint Meinrad School of Theology. In 2007, he was named subprior (third in leadership) of the monastic community.

He is the author of numerous articles and has contributed to several theological texts. He is the editor of Sacerdos in Aeternum: Prayers and Blessings for Priests and co-editor of Theology and Religious Pluralism. In 2020, he co-authored the book, We Will Serve the Lord: Prayers and Blessings for the Domestic Church. In 2021, he wrote the book, Father Manners: A Guide to Etiquette for Catholic Clergy.

Br. Zachary joined the Benedictine monks of St. John’s Abbey in Collegeville, MN, in 1996 and professed his solemn vows in 2000. While at St. John’s, he was director of field education, director of lay spiritual formation and involved in prison ministry.

He transferred to Saint Meinrad Archabbey in 2008. Currently, he is director of monastery vocations and director of public reading, and he continues his work in prison ministry.

Monte Cassino pilgrimages will be held in May