Fr. Columba Kelly, OSB, 87, a monk and priest of Saint Meinrad Archabbey, St. Meinrad, IN, died on June 9, 2018, at the monastery. He was a jubilarian both of profession and priesthood. 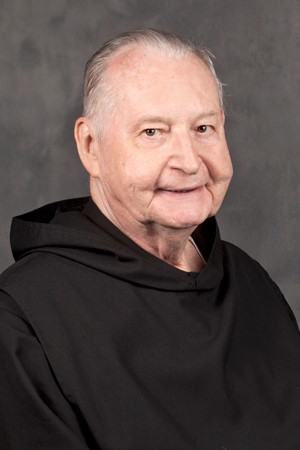 Fr. Columba Kelly, OSB, 87, a monk and priest of Saint Meinrad Archabbey, St. Meinrad, IN, died on June 9, 2018, at the monastery. He was a jubilarian both of profession and priesthood.

He was born in Williamsburg, Iowa, on October 30, 1930, and was given the name John Joseph at his baptism.

He attended St. Ambrose College, Davenport, Iowa, for several years before transferring to Saint Meinrad College. Invested as a novice monk on July 30, 1952, he professed simple vows on July 31, 1953, and his solemn vows on August 6, 1956.

Fr. Columba completed his theological studies in Rome and was ordained to the priesthood on July 5, 1958. The following year, he received a licentiate in sacred theology from the Pontifical Athenaeum Sant’ Anselmo.

He then pursued graduate studies, earning his doctorate in Church music at Rome’s Musica Sacra in 1963. He studied under Dom Eugène Cardine, OSB, monk of the Abbey of Saint-Pierre in Solesmes, acknowledged as the father of the semiological interpretation of chant.

When he returned to Saint Meinrad in 1964, he was named the choirmaster of the monastic community and began to teach in both the College and the School of Theology. His lasting contribution was to introduce chant in English into the celebrations of the Divine Office and the Eucharist. The monastery’s collection of his chant compositions number nearly 2,000.

In addition to his many years teaching at Saint Meinrad, he taught courses on liturgical music for 12 summers at St. Joseph College, Rensselaer, IN. Other summer teaching assignments included the University of Wisconsin in Madison and California State University-Los Angeles.

Through his many workshops to parishes and religious communities, and through the collections of his antiphons published by GIA and Oregon Catholic Press, his work is known by many cantors, choirs and parish communities throughout the United States.

He was also a standing member of the Chant Division of the National Pastoral Musicians Association. In 2015, he was named only the second recipient of the Spiritus Liturgiae Award, given by The Liturgical Institute in Mundelein, IL.

In addition to his countless scores, Fr. Columba contributed to the literature on chant and sacred music. These include his 2003 book, Gregorian Chant Intonations and the Role of Rhetoric; “The Organ,” an article in a book sponsored by the National Liturgical Conference and the Church Music Association; and, in 2006, his translation of and notes to the first volume of Agustoni’s and Göschl’s An Introduction to the Interpretation of Gregorian Chant.

His service also included an assignment as prior (second in leadership) of the monastic community for six years (1978-84), and a long term as one of the commuting chaplains for Monastery Immaculate Conception, Ferdinand, IN.