The Rule of St. Benedict 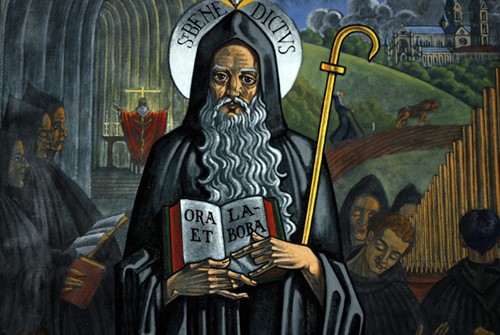 Image of St. Benedict on a mural in Memorial Lobby

The Rule of St. Benedict was written as a guide to living life in community. It was not the first "rule" for Christian followers, but its common-sense approach and Scripture-based guidelines have stood the test of time.

Here are some comments about the Rule from Fr. Harry Hagan, OSB, a monk of Saint Meinrad Archabbey:

A Guide to Monastic Life

St. Benedict wrote his Rule roughly between 530 and 540 A.D. during the decline of the Roman Empire. Despite the chaos of the invading tribes, St. Benedict produced a classic statement on the monastic life.

By "classic," I mean a statement that transcends its historical situation. Though some of the guidelines belong only to its historical context, much in the Rule provides a vision that speaks not just to monastic life, but to life as a Christian and as a human being.

The Rule belongs generally to the wisdom tradition. This includes biblical wisdom such as the books of Proverbs, Ecclesiastes and Sirach. Wisdom literature balances opposing values.

An Example of Wisdom Literature

For example, "A stitch in time saves nine" is balanced by "Haste makes waste." The wise not only know both sayings, but they also know which one applies to the present situation--whether to act quickly or to move carefully and deliberately.

Wisdom literature is wider than the Bible. Egypt had a number of "instructions," typically by a sage to his "son."