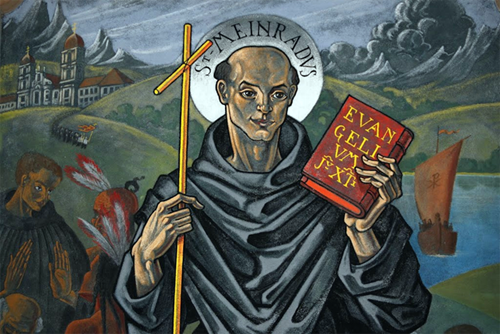 Image of St. Meinrad on a mural in Memorial Lobby

Born about the year 800 in what is now Germany, Meinrad was a Benedictine monk who lived as a hermit for much of his life, dedicated to prayer and solitude. Even as a hermit, his reputation as a wise and holy man led people to seek him out for counsel and prayer.

Despite his desire for solitude, the monk Meinrad graciously attended to his guests’ needs, physical as well as spiritual.

In 861, two robbers came to Meinrad’s hermitage, believing he had treasures hidden there – gifts from the people he had counseled. In spite of a premonition of his impending death, Meinrad invited the robbers in and offered them food and drink.

The men murdered him and then fled in fear without taking anything. Meinrad’s death earned him the title of “Martyr of Hospitality.”

Meinrad’s hermitage became the site of the Abbey of Einsiedeln in 934. When, in 1854, Einsiedeln established an abbey in America, the name chosen was Saint Meinrad.

The feast of St. Meinrad is celebrated on January 21.