The Archabbey Church of Our Lady of Einsiedeln is the heart of the Benedictine community of Saint Meinrad Archabbey. It was completed in 1907 and underwent a major renovation in 1996-97.

The first stone for the building was laid in 1899 and construction continued for nearly eight years. Workers from the monastery and the local town hauled large sandstone blocks, using horses and mules, from the abbey's quarry a mile away.

The church was designed by a Franciscan brother, Adrian Wewer, OFM (1836-1914), a gifted "amateur" who designed more than 100 church buildings over his long career.

Excavation and fundraising had been set in motion in the early 1890s in the tenure of Fr. Fintan Mundwiler, OSB, second abbot of Saint Meinrad. After Abbot Fintan's death, the project was carried forward under the leadership of Fr. Athanasius Schmitt, OSB, the third abbot.

The building itself is 64 feet wide by 184 feet long; from floor to cross-vaults, it measures 58 feet. Prior to the church renovation in 1968, a center aisle and two side aisles divided the nave.

Many of the original adornments and special features of Our Lady of Einsiedeln had to be contracted out and built elsewhere. As it turned out, the church interior took three years to complete and proved to be the most expensive part of the project.

By 1907, the Abbey Church was a quite stunning achievement. The building's great supporting structures were massive columns made of Georgia marble.

The original high altar, itself a work of art, had been created in the studios of Joseph Deplaz of Regensburg, Bavaria. Its mensa (table), weighing over two tons, rested on six columns of blue-gray Carrara marble. 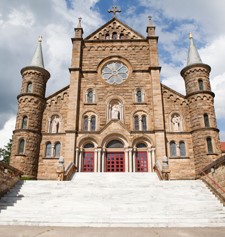 Marble steps lead to the main entrance, where three statues are set in niches above the doors. The statues were sculpted of Tennessee marble by Herbert Jogerst. The center statue is of the Madonna and Child. Known as Our Lady of Einsiedeln, she is the patroness of the Archabbey Church.

On the left is St. Benedict, who in the sixth century wrote a guide to monastic living that is still followed today by monks and nuns of the Benedictine order.

On the right is St. Scholastica, the twin sister of St. Benedict. She is traditionally regarded as the founder of Benedictine monasticism for women.

The windows are the original stained glass ones produced by the Emil Frei Studio in St. Louis, MO, and the studio of Francis X. Zettler of Munich, Germany. 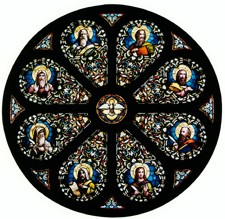 At the time, the church served the needs of the Benedictine monks, as well as the students attending the seminary operated by the monks and the local townspeople, who did not have a parish church at that time.

The renovation of 1996-97 was extensive, with the installation of a marble floor, a new altar, the relocation of the organ, and new furnishings that included the return of the monks' choir stalls, which had been removed from the church in the 1960s.

The renovation was successful in preserving and honoring the liturgical tradition of those early monks. And its beauty and design provide a vitality that allows the monastic community to continue its tradition of prayer and liturgy well into the 21st  century.