These murals were painted by Fr. Gregory de Wit, a monk of Mont César Abbey in Belgium, in the 1940s. The St. Benedict and St. Meinrad murals are located in Memorial Lobby, while the Christus is in the Archabbey Church. 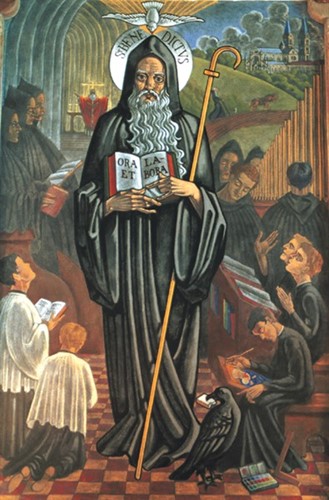 The mural of St. Benedict shows him holding a book that reads ora et labora, which means "pray and work." This directive is from the Rule of St. Benedict and has become a motto associated with Benedictines since the earliest centuries.

In the upper right corner of the mural is the Archabbey Church, depicted with a monk tilling a field. Like many Benedictine monasteries, Saint Meinrad formerly shared in the traditional work of farming. Today, while the Archabbey still owns farmland, all but a small garden is leased to local farmers.

Saint Meinrad's primary apostolic work is the graduate-level Seminary and School of Theology, which provides education and formation for priests, permanent deacons and lay ministers.

In the lower right corner of the mural are young seminarians studying from books, yet also learning about art. Arts and crafts have been an important part of monastic life as well. Several of the monks are artisans: painters, weavers, potters, carpenters and gardeners.

The left side of the mural is dedicated to the Liturgy of the Hours and daily Mass. Communal prayer is a major element of the life of a monk. The monks gather in the Archabbey Church five times a day to pray the psalms or celebrate Mass. You can also see three monks in choir. The monk with a closed book is a self-portrait of the artist, Dom Gregory de Wit. 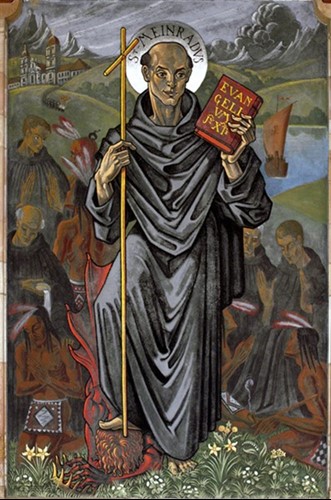 St. Meinrad was a hermit monk who lived during the ninth century in what is present-day Switzerland. In fact, Einsiedeln Abbey, Saint Meinrad's mother house, was built on the site of his hermitage. Despite the mural's depiction, St. Meinrad, the martyr, never visited America. Rather, the mural is symbolic of the history of the monastic community at Saint Meinrad.

In the upper left corner is the Abbey of Einsiedeln, set at the foot of the Swiss Alps. The procession of monks signifies the Benedictines who left Einsiedeln to start a new foundation in southern Indiana.

The ship in the upper right symbolizes the monks crossing the Atlantic Ocean to America. In fact, a ship appears as part of the monastery's official crest.

Further down on the right, you'll see Native Americans with the monks, who are baptizing, teaching and preaching to them. Saint Meinrad's first abbot, Martin Marty, was very interested in missionary work, particularly to the Native Americans. In the 1880s, the monks of Saint Meinrad became intensely involved with the Sioux tribes in the Dakota Territory. In fact, one of Saint Meinrad's daughter houses, Blue Cloud Abbey, was founded in the 1950s as a school for American Indians.

The mural is a typical artist's rendition of a missionary. St. Meinrad holds in his left hand a large book that reads Evangelium, which means "Good News." His right hand holds the cross of Christ. His foot is stepping on the head of the devil as the devil grasps futilely for the crown of eternal life. 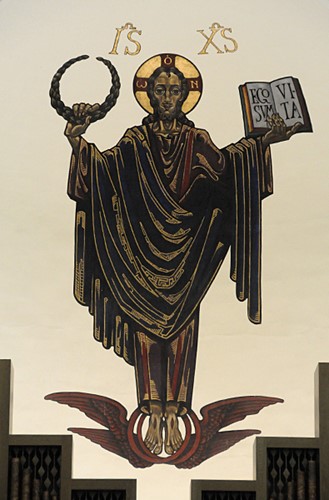 The Christus, the figure of the risen Christ, is found high on the wall of the Archabbey Church. The large Greek letters above the figure stand for Iesous Christos (Jesus Christ).

In his left hand, Christ holds the book of life, inscribed with the Latin words Ego Sum Vita, "I am the Life." In his right hand is the laurel wreath crown of glory.

Three smaller Greek letters, in the rays of the halo surrounding Christ's head, mean "I am the Living One," a New Testament echo of God's words to Moses as He confronted him in the burning bush, "I am who I am" (Exodus 3:14).