Gregorian chant takes it name from Pope St. Gregory the Great. Although the tradition proclaims him as the composer of chant, historical scholarship shows rather that he served as the great link between the early Church and the Middle Ages. As such, he symbolizes the chant of the churches in Rome, which spread to England and to Gaul in the seventh and eighth centuries.

With the impetus of Charlemagne (768-814) and his Carolingian renaissance, musicians created new and more elaborate chants. The early development is difficult to trace because all the music was handed on as an oral tradition; nothing was written down even though the repertoire for the Mass and the Divine Office comprised well over 2,000 pieces.

This music can be divided into three types, marked by the degree of difficulty. Simple chants allowed the whole congregation to participate, and some could easily reach back before Gregory, perhaps even to the music of the synagogue.

More complex are the antiphons for lauds and vespers. Still, they are not too difficult for a monastic community with members of varying skills. The "O" antiphons for Advent belong to this second group.

Finally, solo cantors or small groups of trained musicians would sing the complex or melismatic chants for the propers of the Mass. These complex chants are built of structural notes that are linked by an elaborate interlacing of notes, not unlike the Celtic knots found in the art of the Book of Kells. The effect is a kind of medieval jazz.

During the ninth century, a system of notation developed to assist the cantors. Unlike modern notation, which indicates pitch and rhythm, this system of dots and lines sought to preserve the nuances of the oral performance. As time passed, memory faded, and it became necessary to indicate pitch, and so the four-line staff developed with its square notation.

The new system lacked nuance; one grouping of square notes stood for five or more different signs in the old system. The free rhythm and modal system were also losing ground. The development of polyphony demanded strictly measured time, and the major and minor keys dominated. The tradition was obscured, if not lost altogether.

Modern study has sought to recover the lost oral performance. The scholarship begins at Abbey of Solesmes with the collecting and copying of texts. The question of rhythm has occupied much of the scholarly discussion.

While some have argued for a metric approach, the Solesmes school has emphasized the natural word rhythm as the basis for chant. Dom Eugène Cardine of Solesmes, with his students at Musica Sacra in Rome, has documented this fundamental principle across the manuscript tradition. This work has opened the way to recovering the nuance of the medieval chant.

Fr. Columba Kelly, OSB, a Saint Meinrad monk and chant composer, did his doctorate under Dom Cardine. The music on Saint Meinrad's Advent/Christmas and Lent/Easter CDs reflects that study in two ways.

The interpretation of the Latin chant seeks to recreate the vitality of the chant recorded in the earliest manuscripts. The English chant that Fr. Columba has created is grounded in English word accent and the natural word rhythm of the language. The result is strangely modern: modal, free rhythm music. 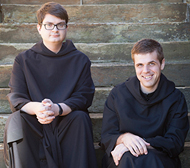 Listen to our podcast episode about chant.