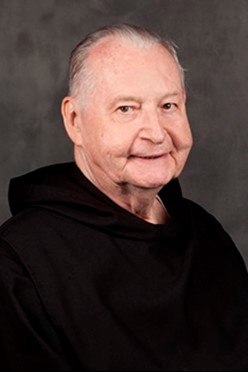 Fr. Columba Kelly, OSB, a Benedictine monk of Saint Meinrad Archabbey since 1952, was a well-known composer and teacher of Gregorian chant. He died on June 9, 2018, at age 87.

He finished his doctorate in Church music at Musica Sacra in Rome in 1963, just as Roman liturgy was moving from Latin into English in the United States.

In 1964, Fr. Columba was appointed choirmaster for Saint Meinrad, where he began his work of composing English-language chants based on the principles used to create the original Gregorian Chant repertory. That same year, he also began teaching at Saint Meinrad College and Saint Meinrad School of Theology.

For 12 years, he taught summer courses at St. Joseph College's (Rensselear, IN) Liturgical Musical Program. He led numerous workshops on chant, throughout the United States, at the Abbey of Solesmes in France, and for Benedictine communities in Australia.

During the summer of 2003, he gave three presentations on chant at the National Pastoral Musicians' National Convention in Cincinnati, OH.

In May 2010, he gave two presentations on chant at the Ascending Voice II symposium sponsored by Pepperdine University.

Fr. Columba also directed Saint Meinrad's chant schola in a program of Latin and English chants produced for CDs: an Advent/Christmas CD, a Christmas CD and a Lent/Easter CD. In 1999, he directed the schola in a performance at the Ravinia Festival in Chicago. He assisted in a number of special projects and compositions regarding Gregorian Chant.

His settings of the Responsorial Psalms and Refrains for Advent/Christmas and Lent/Easter seasons have been published by Gregorian Institute of America, Chicago, IL. His chant style setting with SAB chorus of the St. John Passion for Good Friday has been published by Oregon Catholic Press, Portland, OR. He also wrote two books on chant, published by Edwin Mellen Press.

As part of his legacy, Fr. Columba created a body of English chant based on the natural rhythm of spoken word.

The liturgical books at Saint Meinrad include nearly 2,000 responsories and antiphons written by Fr. Columba. This music, which represents only part of his work, forms the day-to-day music of the Archabbey. This work has been carried on with the assistance of his confreres, Fr. Samuel Weber, OSB, Fr. Tobias Colgan, OSB, and others.

Fr. Columba worked with recreating melismatic chants for English texts developed to fit (more or less) the Latin melody. Although the music for the English is similar to that for the Latin, it is not the same. Rather, it has been crafted to respect the rhythm and meaning of the English text.

In addition, Fr. Columba created wholly new compositions, such as the responsorial psalms for the Third Sunday of Advent and for Christmas Midnight Mass; both are contained on the Advent and Christmas CD.

Listen to our podcast episode about chant.