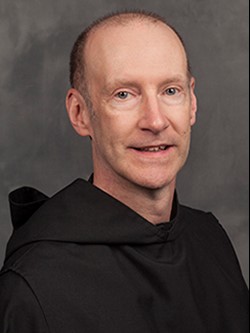 Fr. Joseph began his work as subprior on June 1, 2021. He grew up in Bloomington-Normal, IL, and graduated from Quincy University, with a bachelor’s degree in international business (1981).

After graduation from college, he worked in a bank for five years. From 1981-1986, he attended Saint Meinrad School of Theology and received his Master of Divinity in 1991. He was ordained in 1991 as a priest for the Diocese of Peoria and did parochial work as both associate pastor and pastor for several years.

During the summers, he attended Indiana University and worked on a master’s degree in library science, which he earned in 2005. Since 2008 he has worked in the Periodicals Department, and from 2009 to the present as the cataloger for the library.

Fr. Joseph was appointed assistant director (2001) and then associate director of Benedictine oblates in 2004. He has given many conferences and retreats for oblates.

In addition to his major work as a librarian, Fr. Joseph has served as secretary to the Abbot's Council and Chapter.