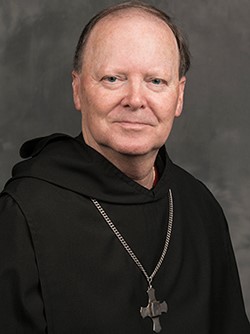 He is the 10th abbot and seventh archabbot in the community's 163-year history, succeeding Archabbot Justin DuVall, OSB, who had served as abbot since December 31, 2004.

Before his election, Archabbot Kurt had served as prior of Saint Meinrad Archabbey since July 9, 2010. The prior is the second in leadership in the monastery.

He then earned a licentiate (1986) and a doctorate (1993) in sacramental theology from Pontifical Anthenaeum of Sant′ Anselmo, Rome.

From 1978-81, Archabbot Kurt served as administrative assistant to the president-rector. In 1980 he was appointed associate spiritual director for Saint Meinrad Seminary and School of Theology for three years.

From 1986-90, he taught sacramental theology in the School and was assistant to the novice/junior master in the monastery. Also during that time, he served as secretary to the archabbot (1986-89) and as vocation director for the monastery (1986-90 and 1992-98).

Archabbot Kurt taught sacramental/liturgical theology in the Seminary and School of Theology from 1986-2016. For 10 years, he also served as the director of spiritual formation.

Other assignments have included provost-vice rector of the School of Theology (2005-08) and chair of the Archabbey Church Renovation Committee (1993-97).

He is the author of several books, including A Confessor's Handbook (a revised and expanded edition was published in 2010); Sacramental Theology: Means of Grace, Ways of Life; Return to Grace: A Theology for Infant Baptism and his most recent, From Sinners to Saints: A Guide to Understanding the Sacrament of Reconciliation. He has written numerous articles and book reviews for a variety of publications.

He has given days of retreat and recollection for clergy and laity. He also served as the monastery's master of ceremonies.