Prior of Saint Meinrad Archabbey 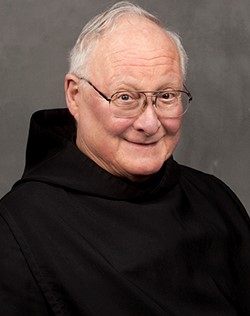 Fr. John McMullen is a native of Vincennes, IN. He became a Benedictine monk of Blue Cloud Abbey, Marvin, SD, on August 1, 1960, and made his first profession of vows on August 15, 1961.

He studied at Saint Meinrad's high school and college from 1955-60, completing college at Blue Cloud Abbey. He studied theology at St. Bede Abbey, Peru, IL, and was ordained a priest on May 29, 1966. He did graduate studies at The Catholic University of America from 1967-69. He holds a master's degree in library science.

As a monk of Blue Cloud, he served in various assignments, including 40 years as the abbey librarian. He also served in area parishes and as the abbey treasurer. He served the Native Americans at St. Ann's Indian Mission, Belcourt, ND, for three years. When Blue Cloud Abbey closed, Fr. John transferred to Saint Meinrad Archabbey in 2013.

He currently serves as an adjunct priest at St. Meinrad Parish in St. Meinrad and St. Boniface Parish in Fulda, IN, and as a commuting chaplain for Monastery Immaculate Conception in Ferdinand, IN. ​He began his assignment as Saint Meinrad's prior on June 11, 2016.