A reader asks, "How is the tone of the community, the atmosphere, affected by the death of a monk?" and "The monks of Saint Meinrad have experienced much loss in the last year. How has the mood of the community changed, if at all?"

These are good and timely questions as we mourn the recent passing of our confrere Archbishop Daniel Buechlein, and as we mark the one-year anniversary of the passing of our confreres Fr. Rupert Ostdick and Fr. Gavin Barnes. These are difficult questions, too, because it's hard to answer on behalf of the whole monastic community. We are a community of individuals, after all.

In general, I would say that every death affects each monk differently, depending on the relationship each monk had with the deceased. As for the mood of the whole house, yes, it tends to change.

As our monastery is equipped with a well-staffed and equipped infirmary, our confreres are usually able to die at home, and as they are passing, the atmosphere of the house does become a bit quieter, a bit more somber and serious, out of respect for the confrere and those close to him, including any family and friends that may be present.

Privately, we each cope with grief in our own way. Corporately, we process our grief through the liturgy and through our own cherished monastic rituals. Every time a monk passes, we are reminded of why we have entered the monastery – to seek God in the company of our brothers and to prepare for an eternity spent in his presence.

What about the house? The Office of the Dead. 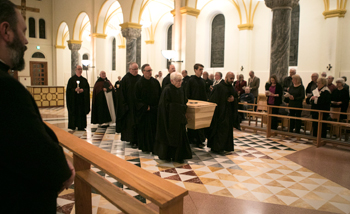 Speaking of our monastic observances concerning the end of life, one of our most intimate and beautiful is the Office of the Dead. It is a prayer service held the night before a monk’s funeral. The assembled monastic community receives the body from the funeral home at the “Great Doors,” or the main entrance to the monastery.

(These are the same doors where new novices are ceremoniously welcomed into the community, and so each monk is welcomed through the doors of the monastery twice: first, when we become a novice, and second, when we have died.)

The monk is taken through the house to the darkened church in procession as the monks chant and carry lit candles. The body of the deceased is rested between the two sides of the monastic choir. The Office of the Dead proper then begins and is presided over by the prior of the monastery, who is vested in a black cope. 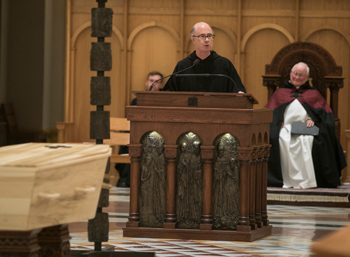 The Office follows the pattern of Vespers, and the monks and guests sing hymns, psalms and responsories suited to the occasion. After the reading of a scripture passage, a monk chosen beforehand by the deceased will offer a eulogy. After the service is over, the deceased monk’s vow chart is placed on his casket, and the body is left in the church so that those who wish may pay their respects.

How January has flown by!

January 1-13: The monks celebrated the feasts of the Epiphany and the Baptism of the Lord with joy and solemnity. The monastic community and friends also thanked Fr. Jeremy for his many faithful years of service as choirmaster with a small reception, and we also welcomed his successor, Br. John Mark, into his new role. Many monks have spent weekends visiting parishes for “Saint Meinrad Sundays.”

January 14-21: We remembered the one-year anniversary of the passing of Fr. Rupert, and we also celebrated the octave of Prayer for Christian Unity in our liturgies. The seminarians made their annual pilgrimage to the Monte Cassino Shrine.

Novice Joseph took his simple vows on the vigil of the Solemnity of St. Meinrad, and he received the name Stanley Rother, after the recently beatified American martyr, Blessed Stanley Rother of Oklahoma. Br. Stanley is likely the first religious in the world to take Blessed Stanley as his patron.

The new bishop of Evansville and Saint Meinrad alumnus, Joseph Siegel, presided at Mass for the Solemnity of St. Meinrad, and he was welcomed warmly by the community.

January 22-31: Many of monks involved in the seminary were away on retreat with other students and faculty. We mourned the passing of our confrere Archbishop Daniel, and we welcomed many friends, relatives, coworkers, priests, bishops and religious to our liturgies. In January, we also celebrated the feast days of many of our confreres.

As always, feel free to submit any questions you might have about our life here at Saint Meinrad to aboutthehouse@saintmeinrad.edu, and perhaps you will see one featured in next month's edition. If you submitted a question and didn't see it featured this month, look forward to next month's edition, and maybe it will make an appearance after all!