A reader asks about the position of the cellarer, as found in the Rule of St. Benedict: what does the cellarer do and does Saint Meinrad Archabbey have one?

In St. Benedict’s time, the cellarer was a monk appointed by the abbot to manage the provisions and physical affairs of the monastery. The cellarer was to be a monk of a good, wise and temperate character, and he took care of the goods and utensils of the monastery, distributing them to the monks as needed, as well as to the sick, the poor, guests and children.

Saint Meinrad is a large and modern institution, and the duties performed by the cellarer in St. Benedict’s time are delegated to a number of different individuals in ours.

Within the monastery, the vestarius is the one in charge of keeping the vestry (our storeroom) stocked with supplies for use of the community, such as toiletries, underclothes, and other essentials that the monks are able to take as needed. When monks are given permission for new shoes or clothes, the vestarius may order them as well.

As to the other duties of St. Benedict’s cellarer, our almoner administers our giving to the poor and charitable causes, the house custos manages the furnishings of the house, and our finances are watched over by our business manager and other co-workers.

Finally, our physical facilities co-workers and director tend the grounds and facilities of the monastery, seminary, and other buildings. Managing the goods and resources of the Archabbey is a real team effort, and many monks and co-workers contribute to their well-being.

On September 2, we commemorated the 131st anniversary of the Great Fire. The academic year began on September 4, and Archabbot Kurt presided at the community culpa service. 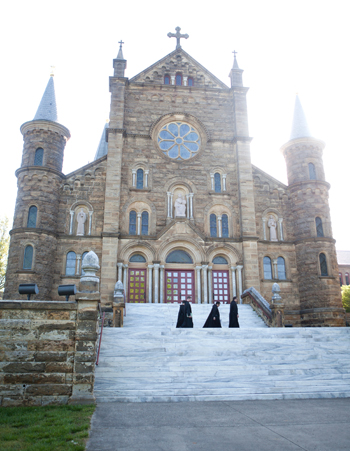 On September 6, Fr. Bonaventure celebrated his 100th birthday, and he joined the community for supper and was seated at the abbot’s table.

Also on September 6, our Fr. Mel departed this life for the next, and over the following days we mourned his passing even as we celebrated his life.

On September 19, the monastic community attended a presentation on mental health offered by Dr. Sam Stodgehill of St. Luke’s Institute in Louisville.

On September 22nd, the community enjoyed a pizza lunch at the UnStable, and many new oblates and oblate novices were on the hill to be invested as novices and to make their oblation.

On Monday the 24th, Fr. Benedict celebrated his 91st birthday, and on Wednesday the 26th, the monastic community had a budget and finance meeting in looking forward to the coming year.

Finally, on September 30th, we celebrated the 21st anniversary of the renovated Archabbey Church. We thank God for all the blessings He has given us.

Thanks for reading! As always, readers can submit any questions they have about the monastery to aboutthehouse@saintmeinrad.edu and hope to see the question answered in a future edition.